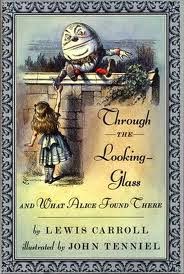 WORDPLAY post #10
POETIC PARODY LYRICS:  "Mergerwocky", G. Hurwitz, published in the Western News, 2000,  This poetic parody draws inspiration from Lewis Carroll's Jabberwocky.
ORIGINAL POEM: "Jabberwocky", Lewis Carroll, 1871; the poem was included in the children's novel "Through the Looking Glass" in 1871.
EDITED: The poem was modified by Giorgio Coniglio to fit the format of this blogsite.

(poetic parody based on Jabberwocky")


Restructure! so the i.v. teams
Did energize recycled waste;
De-focused were the laser beams
And the closed wards outplaced.

He shook his VPs' golden hands:
Time-line proactively he maps,
Then spreadshot he by the Lap-Top key
And graphed the Full-Times' caps.

And  as in upsized thought stood he,

The Mergerwock, with errored claims
Came sniffling through the OPD,
De-listing as it came.

Old site! New Site! And deep in debt:
The shuttle-bus reshuffled wards.
"Let's integrate, new Mission state!"
He e-mailed to the Board.

"And hast thou done the Merger-deal?"

A mix of cheers and groans and snarls;
"Come to Grand Rounds, my deanish boys
At the Princess-Di-and-Charles".

'Twas Wednesday; at the clubhouse bar

Complained the Rae-dayed Docs anew,
"Our Conjoint Foursomes shoot near par,
But the Brass still play through!"