PARODY SONG-LYRICS,
inspired by the author attending a James Taylor concert at the North Charleston Coliseum, May 15, 2018.
ORIGINAL SONG#1(music): "Mexico", James Taylor 1975.
ORIGINAL SONG#2(lyrics): "Nessun Dorma", aria from the 3rd act of "Turandot" composed by Giacomo Puccini, first performed after his death in 1926. Translation of the libretto can be found on the Wikipedia link.
SONGLINK: See the version of this post designed for ukulele and guitar players on our lyrics-blog 'SILLY SONGS and SATIRE' here. (If you haven't been signed up for that source of lyrical wonderment but crave entry, leave a comment here including your email, in strict confidence). 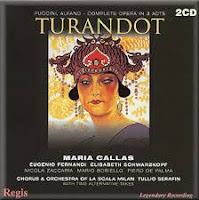 Singing along with the famous arias brings the crowd out to the opera. You don’t have to know much Italian to understand the libretto here however; ‘ciao’, pronounced like ‘chow’, means ‘so long’. As the mythical princess-character was reinvented by a French author, her name is usually pronounced French-style with the final ‘t’ silent. 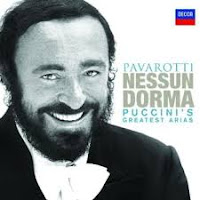 Wow, “Turandot”!
Sounds so moving, I must see that show,
Or “TuranDOTT” – some folks thought Giacomo*
Said that before he said ‘ciao’.

French and German version of a Persian tale
‘Bout a Princess of China who detested all males.
Empathize with hero who’s beheaded if fails.

Wow, TuranDOTT!
Rang the gong, and her three riddles I got.
Kept my head but the next risk is the same,
I’ll die if she finds out my name.

'Nessun dorma' means that no one should sleep,
Not even the Princess who’s a sadistic creep.
Secret hid within me; if divulged, price is steep.

Wow! Turandot!
Might lose my life when the glaring sun shows
Or get a wife; I could still win this game,
If nobody finds out my name.

Vanish, o night! set stars, give me hope.
The folks back home must think I’m smoking some dope.
She’ll get a long kiss, end the silence, name on her lips.

Wow! The princess Turandot -
Must be quite a beauty, but I don’t really know.
And oh-oh-oh-oh! Turandot
To close I’ll sing, ‘Vincerò’.  ** (riff on last line of aria)

Wow! “Turandot”!
A Puccini opera that I don’t really know
Oh, “Turandot”
I guess I’ll have to go now.

* Giacomo Puccini, composer, died in 1924 before he had quite completed the opera “Turandot”. The aria “Nessun Dorma” in the third act is the best-known piece of music in this work.
** Vincerò (Italian) I will win; repeated x 3 as last words of the famous aria. 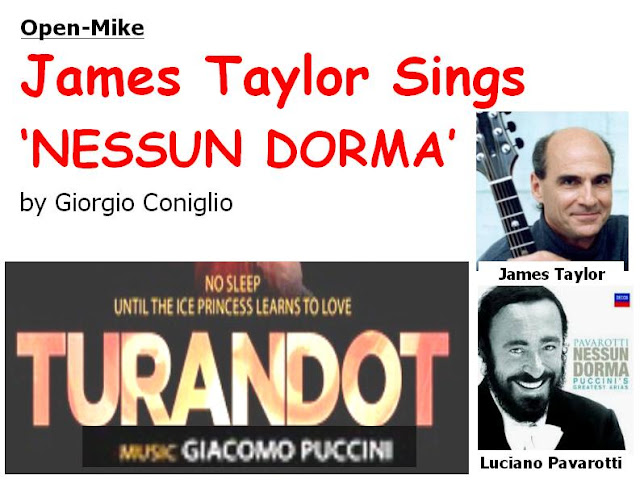 SONGLINK:  Click here to view on the blog 'SILLY SONGS and SATIRE' song-lyrics for a parody based on Another James Taylor favorite.