Edifying Lyrics: "A LESSON ABOUT REDUPLICATIONS"

ORIGINAL POEM and SONG: Dr. G.H. and Giorgio Coniglio, 2015, updated  2017.
EXPLANATION: This poem, consisting of a lesson on types of reduplication, evolved as a musical parody using the template of "The Elements" by Tom Lehrer. Further exploration of this type of wordplay also progressed into the venture of
Feb 15, 2017 entitled 'Abracadabra' to 'Zoom-zoom': possibly the world's largest compendium of reduplications.
Eventually, this poem was set to music, using the framework of Lehrer's patter-song framework, and became an intrinsic part of a series of nine songs devoted to musical Word-Pairs. This posting of The Lesson, and subsequent posting of a Lexicon of Reduplications contains a total of almost 300 examples of this fascinating and amusing linguistic form.
UKULELE and GUITAR-FRIENDLY LINK: Our whole series of songs can be found in a friendly format for ukulele (and guitar)-players on our sister blog  "SILLY SONGS and SATIRE", along with chord-charts and helpful performing suggestions; click here to proceed to this site. 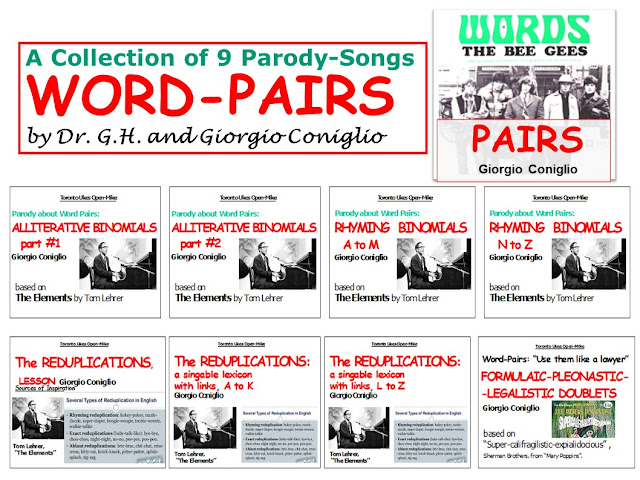 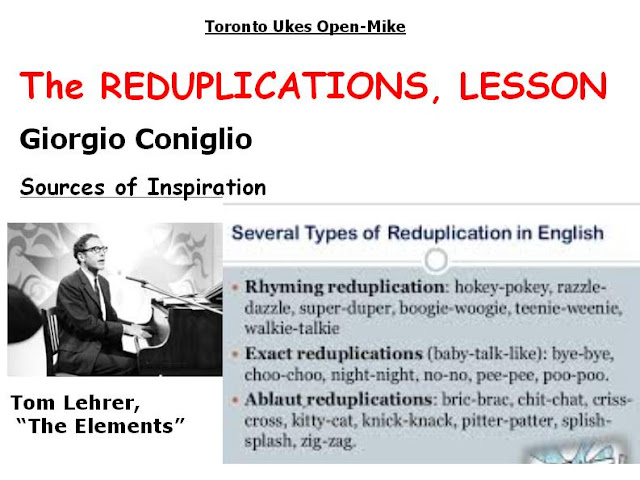 1) Introduction
I’m so enthralled with lyrics – their inherent musicality;
I love the words I’ve heard, for both their quantity and quality.
And so I’ll share with you this recent lexic revelation –
My favorite word-device goes by the name ‘reduplication’.
This humble term is used for killer-diller innovations,
Some recent lulus – chick flick, boy-toy – marvellous creations.
For others, spoke with reverence, their birth can date back centuries
Like hully-gully, boogie-woogie, riff-raff, and hurdy-gurdy.
These fuzzy-wuzzy friends are formed by vocal repetition,
With wi-fi you might find them in Wiki’s current edition;
The three important sub-types you will wiki-wiki* learn about
Are known as Rhyming, Exact, and the oddly German-named Ablaut *.
2) Rhyming Reduplicates
Hear hear! some fine examples start with “H”, like helter-skelter, see!
Hodge-podge, humdrum, hubbub, hillbilly, and higgledy-piggledy.
Although the showing’s not so glowing for some, like the letter “D”
Just ding-aling and Double-Bubble, and surname of H.-Dumpty.
3) Exact Reduplicates
As toddlers we knew quite precisely what pee-pee and yum-yum meant
They’re constituted by exact repeating of each element.
Extension into adult life – tsk-tsk!  it doesn’t matter
For mahi-mahi, rah-rah! hubba-hubba, night-night, yada-yada.
4) Ablaut Reduplicates
Linguistic term that might put off, but don’t throw in the towel
To form the second part you merely change a single vowel.
Criss-cross, splish-splash, King Kong, mish-mash provide the explanation;
Though tidbit, boob-tube, whipper-snapper show some variation.
5)  Borrowings from Other Languages
Some foreign words sound quite absurd, and might be greeted with yuk-yuks,
Like chi-chi, tutu, tête-à-tête, and tse-tse, muu-muu and mukluks.
6) 'Shm-Reduplicates'
And many word-shmords are employed by speaker-shmeakers of Yiddish,
Like fancy-shmancy, choosy-shmoozy, horseradish(mmh!), gefilte-fish.

7) Related Forms e.g. collocation
Dream Teams of paired words get primetime - in rhyming collocation;
These catchy terms, like kitty-cat, aren’t true reduplications.
Tut-tut! for many wild-child words, there's no accord on how they're grouped,
Like fuddle-duddle, Walla Walla, voodoo, wiseguys, hula-hoop.

8) Conclusion
The lesson's sung, my cha-cha's done, we’ve reached our termination.
(Boo-hoo!) True blue, and through and through we’ve viewed reduplication;
But while we bid our fond ta-tas, I leave this final message – “HI!”
These phrases love to start with “H”, and their initial vowel – “I”.
Ta-Dah !!!

* German= "off-sound", word coined in the 16th century to indicate a systematic change in the vowel of a word-root to convey a difference in meaning; rhymes with shout
* Hawaiian for quickly or  bus !!

Reduplications as they are best known, sometimes  also called duplications, are language forms (morphs), usually for nouns, in which an element of the word is repeated with little or no change; they figure prominently among the most musical elements in English and in other languages. To this author, the more commonly used term seems redundant. Many examples begin with the letter 'h', e.g. hanky-panky, harum-scarum, helter-skelter, hillbilly, and hubba-hubba.
HOT LINKS to WORD-PAIR PARODY LYRICS,
here on the wordplay-poetry-lyrics blog "Edifying Nonsense" ...
Pairs
Binomials (didactic discussion)
Alliterative Binomials, part #1
Alliterative Binomials, part #2
Rhyming Binomials, A to L
Rhyming Binomials, M to Z
Reduplications - Lesson
Reduplications - Lexicon A to K
Reduplications - Lexicon L to Z
Legal Doublets .
If you want to resume daily titillations on our blog 'Daily Illustrated Nonsense', click HERE. Once you arrive, you can select your time frame of interest from the calendar-based listings in the righthand margin, and check the daily offerings for any week in the years 2020 and 2021. (There are now over 600 daily entries on the Daily blog, and most of these are also presented here on 'Edifying Nonsense' in topic-based collections.)
Posted by Giorgio Coniglio at November 20, 2020