ORIGINAL SONG: "Simple Twist of Fate" Bob Dylan 1975; covers by Diana Krall and Sean Costello are recommended.
ORIGINAL POETRY: At Wikipedia (click here), you can find a discussion of limericks dealing with the 'man from Nantucket'.
PARODY COMPOSED: Dr. G.H. and Giorgio Coniglio, July 2016, followup to an earlier post.
UKULELE and GUITAR-FRIENDLY LINK: All our songs can be found in a friendly format for ukulele (and guitar)-players on our sister blog  "SILLY SONGS and SATIRE". Click here to proceed to that site, and you'll find chord-charts for uke and guitar for both the parody-song and the original, and some more illustrations.. But note that it is a 'private blog', so you will need to arrange access, if you don't already have it. Leave a comment on this post if you want to access the version with chord-charts and helpful performing suggestions.
PRIOR OFFERINGS: (as per the initial post of April 10, 2021)
1. "There once was a man from Nantucket" (clean version) - 3 verses, unattributed.
2. "There once was a man from Nantucket" (dirty version) - cleaned up by G.C.
3. "A dozen, a gross and a score" - Leigh Mercer
4. "There was an old miser named Clarence" - Ogden Nash
5. "There was a brave girl of Connecticut" - Ogden Nash 6. "There was a young belle of Old Natchez" - Ogden Nash
Chorus. "People say it makes them sick" - Giorgio Coniglio
CURRENT CONTENTS: (more limericks from the classic repertoire, as interpreted by Bob Dylan.)
7. "A flea and a fly in a flue" - author unknown, often attributed to O.N.
8. "There was a young lady of station" - Lewis Carroll 9. "A wonderful bird is the pelican" - Dixon Merritt 10. "There was a young lady named Bright" - Reginald Buller11. "There was an old man of Peru" - Edward Lear 12. "There was a young fellow of Wheeling" - traditional 13. "Hickory dickory dock" - traditional Chorus. "People say it makes them sick" - Giorgio Coniglio
A FICKLE TWIST OF VERSE, part #2
(to the tune of "Simple Twist of Fate") 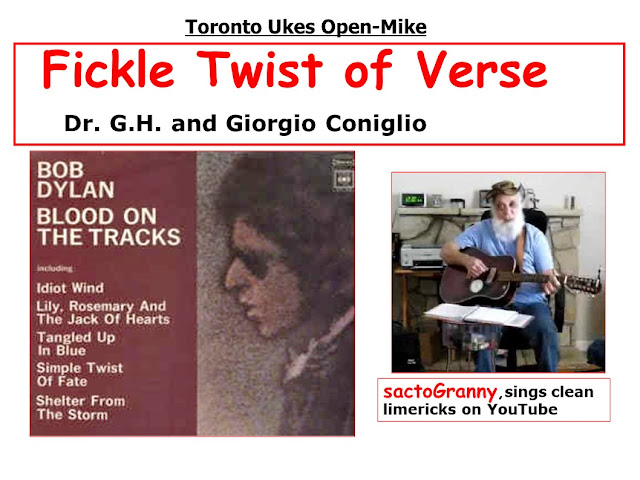 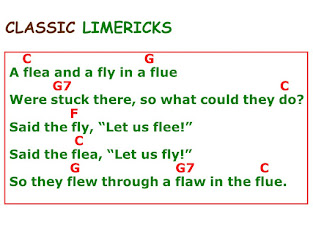 7.
elt flustered, they were in a stew;
Didn’t know just what to do
And finally they saw -
The flue had a flagrant flaw
To flee or fly – no worse, than
To fuss with a fickle twist of verse. 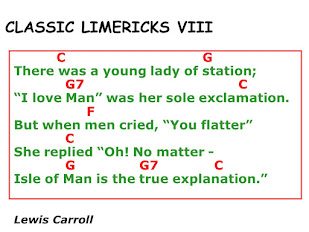 8. “I love Man” – sole exclamation
Of a young lass high in station
(“Isle of Man” her explanation);
“You flatter”, men believed,
And yes, they were deceived.
“No matter” if she flirts,
As she asserts in this Lewis Carroll
verse. 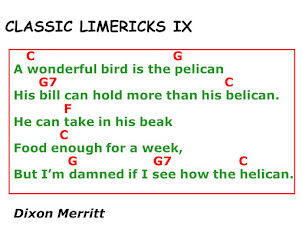 9. A wondrous bird – the pelican
His bill holds more than his belican
I’m damned if I see how the helican
Take all that in his beak -
Food enough for a week;
I guess the bird rehearses
Weekly, for this simple twist of verse. 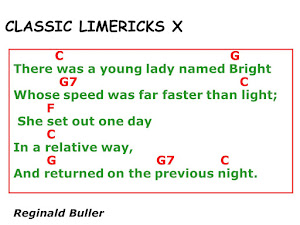 10. A lady traveller named Miss Bright
Exceeded ‘c’, the speed of light,
Returned from trips the prior night
That she’d started the next day,
In a relative way.
That’s Einstein’s universe
Reflected in a fickle twist of verse. 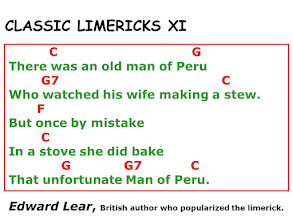 11. There was an old man of Peru;
One day his young wife made a stew.
Folks thought she knew just what to
do,
Cause from their house she ran.
He was found in their stewing pan;
Which triggered some alerts
For older guys in this simple twist
of verse. 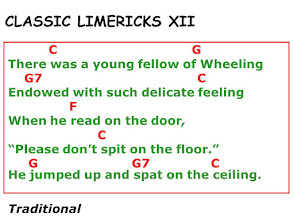 12. A sensitive young guy from
Wheeling
Found the coach-door sign revealing.
So he jumped, spat on the ceiling;
Rather than the floor,
As instructions did implore:
Train signage known for terseness
Spoofed in this twisted lim’rick verse.

13. Hick’ry dick’ry dick’ry dock
A timid mouse ran up the clock.
The time had come for taking stock;
So when the clock struck ten,
He ran down the clock again,
For better or for worse;
As Dylan sang in this twisted nursery verse.
CHORUS: People say it makes them sick
To hear too many limericks;
I fear it had become my shtick,
But now I've lost the knack,
With no good jokes to crack --
A tendency perverse;
Blame it on a fickle twist of verse.
If you want to resume daily titillations on our blog 'Daily Illustrated Nonsense', click HERE.
Posted by Giorgio Coniglio at May 20, 2021