Lyrics for Singable Satire: "SOMETHING TO GROAN ABOUT" (tribute to Kim Jong Un)

ORIGINAL SONG: "Something To Sing About" by Oscar Brand, 1963. You can listen to the well-known version by The Travellers on YouTube by clicking here.
PARODY COMPOSED: Dr.G.H. and Giorgio Coniglio, April 2018, in preparation for upcoming Canada Day 2018.
UKULELE and GUITAR-FRIENDLY LINK: All our songs (Giorgio's parody-lyrics and the originals that gave rise to them) can be found, along with suggested chord sequences in a friendly format for ukulele (and guitar)-players on our sister blog "SILLY SONGS and SATIRE". Click here to proceed to that site, but remember that it is a 'private blog', so you will need to arrange access, if you don't already have it. Leave a Comment on this post if you want to access the version with chord-charts and helpful performing suggestions.

SOMETHING TO GROAN ABOUT

(to the tune of "Something To Sing About")


I have asked Kim Jong Un, if he please would come visit soon,
Climate up here's 'bout the same as Pyongyang.
There'd be Raptors to watch, as he'd ratchet things up a notch;
And it's close to D.C. He replied, and he sang...

KIM's CHORUS#1: "Your mistake was to shelve war, way back after 1812
(Conflicts North-South helped my clan get ahead).
An armed border zone keeps two entities on their own.
When Yanks ask 'DMZee?', you demand 'DMZed'."

Great Leader, don't send missiles  to our Queen Charlotte Isles,
Misty mystical place natives call 'Haida Gwai'.
We hope you and Don work things out, no need to rant and shout.
Diplomacy's tough, but please give it a try.

KIM'S CHORUS#2: "From the wheat on your Prairies to the cheese from your dairies,
Metal tariffs in place on U.S. border fence.
You should follow our music score, as played in Singapore.
Hide heavy weapons, cozy up to Trump-Pence."

Kim, don't plant any nuke on, our territory called the Yukon.
The soil there's quite poor --  permafrost, rocks and scree. 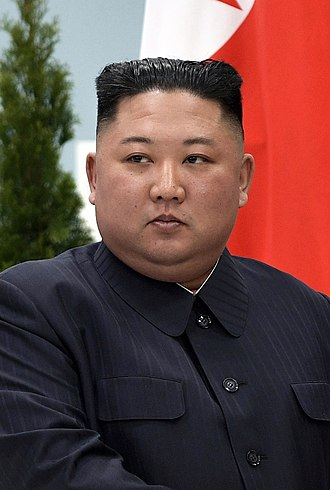 It's too cold to grow a cuke on; you'll need to keep your tuque on
When you visit with Dennis. Bring extra kimchee.

KIM's CHORUS#1 (reprise): "Your mistake was to shelve war, way back after 1812
(Conflicts North-South helped my clan get ahead).
An armed border zone keeps two entities on their own.
When Yanks ask for 'DMZee', just demand 'DMZed'."

If you want to resume daily titillations on our blog 'Daily Illustrated Nonsense', click HERE.