SINGABLE SATIRE: "GET ME ROGER STONE", the song

FURTHER INFORMATION:
Further details re the song's subject and his relationship with the narrator can be found at...
(i) a biographic Wikipedia article, "Roger Stone",
(ii) a news article about Stone's unusual behaviour following his indictment by the Mueller investigation on multiple charges, and
(iii) an article about the highly-praised 2017 Netflix film "Get Me Roger Stone" that documents Stone's longterm role as advisor to Donald Trump.
SONGLINK: See the version designed for ukulele and guitar players on 'SILLY SONGS and SATIRE' here. (If you can't access the lyrics-blog, but would like to be among the glitterati permitted to do so, leave me a note in the Comments with your email, and I will sign you up - Ed.) 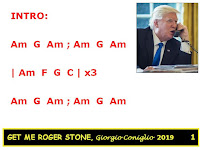 GET ME ROGER STONE - the song

(to the tune of "Heart of Gold"  by Neil Young)


A foppish slickster,  a dirty trickster,
He’s worked with Manafort and ‘Tricky Dick’,
Deceptive tactics he knows to pick, sir
That keeps me seekin’ help from Roger Stone --
Get him on the phone.

That keeps me seekin’ help from Roger Stone,
Get him on the phone!

He is a slick son-xxx, let’s get him quick son,
He’s out-maneuvered jerks at Wiki Leaks.
A touch of Lucifer, he speaks with Guccifer*.
We’ll trash the Clintons using Roger Stone --
Get him on the phone.

I like to seek advice from Roger Stone,
Get him on the phone!

*  Guccifer 2.0 is an online persona, that, according to U.S. documents of indictment, is operated by Russian millitary intelligence. In July 2016, 'Guccifer' claimed responsibility for hacking into emails of the U.S. Democratic National Committee, and releasing them to the media and to the website 'WikiLeaks'.
Lucifer, Latin name for the morning star Venus, is treated in early Christian terminology as a synonym for Satan.

His prospects sagged, judge has him gagged,
That gassy windbag, now he's on his own.
I barely knew him, best to eschew him.
Perhaps I'll later pardon Roger Stone--
Now, he's on his own.


I'll pardon later, but for now, disown.|   repeat and fade.