ORIGINAL SONG: "Simple Twist of Fate" Bob Dylan 1975; covers by Diana Krall and Sean Costello are recommended.
ORIGINAL POETRY: At Wikipedia (click here), you can find a discussion of limericks dealing with the 'man from Nantucket'.
PARODY COMPOSED: Dr. G.H. and Giorgio Coniglio, June 2016.
UKULELE and GUITAR-FRIENDLY LINK: All our songs can be found in a friendly format for ukulele (and guitar)-players on our sister blog "SILLY SONGS and SATIRE". Click here to proceed to that site, and you'll find some more illustrations, and chord-charts for ukulele of guitar. But note that it is a 'private blog', so you will need to arrange access, if you don't already have it. Leave a comment on this post if you want to access the version with chord-charts and helpful performing suggestions.
CURRENT CONTENTS: these are limericks chosen from the classic repertoire for interpretation by B.D.
1. "There once was a man from Nantucket" (clean version) - 3 verses, unattributed.
2. "There once was a man from Nantucket" (dirty version) - cleaned up by G.C.
3. "A dozen, a gross and a score" - Leigh Mercer.
4. "There was an old miser named Clarence" - Ogden Nash.5. "There was a brave girl of Connecticut" - Ogden Nash. 6. "There was a young belle of Old Natchez" - Ogden Nash.Chorus. "People say it makes them sick" - Giorgio Coniglio.
FICKLE TWIST OF VERSE, part #1
(to the tune of "Simple Twist of Fate") 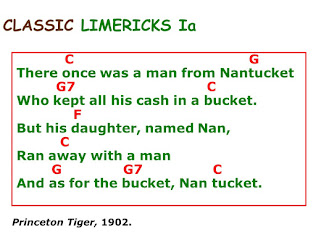 1. There was a family from  Nantucket:
Pa kept cash hid in a bucket,
'Til one day his daughter took it,
Daughter name of Nan -
She ran off with a man.
Pa felt things might get worse, and
Watched out for a fickle twist of verse. 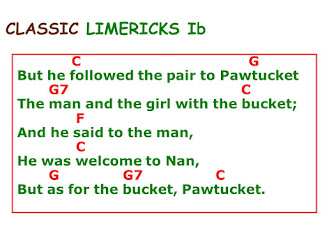 Pa followed couple to Pawtucket -
Little Nan and cash-filled bucket.
Just before old Pa retook it,
He said to the man,
"You’re welcome to keep Nan.”
He uttered a terse curse, and
Moved off with a fickle twist of verse. 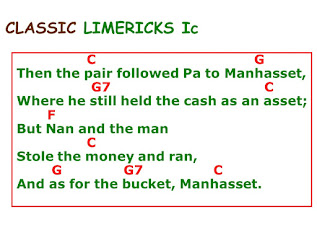 The couple trailed him to Manhasset
Pa held cash there as an asset.
Pail in question? Now man has it;
They stole cash and ran -
Nan with her new man –
She stuffed it in her purse, and
Forgot about a fickle twist of verse. 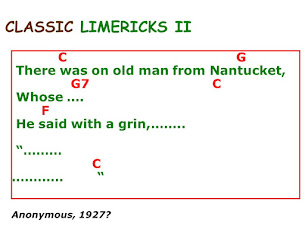 2. They had a neighbor on Nantucket --
On the island he was stuck;
Bad reputation, couldn’t chuck it,
Based on body build –
Girls found him too ‘strong-willed’,
Which fate could not reverse,
Brought on by a simple twist of verse. 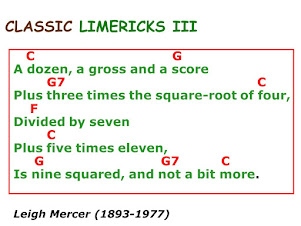 3. A gross, a dozen and a score
Plus three times the square root of  four;
Divide by seven, no whit more,
And add eleven fives,
And hope your brain survives;
That’s nine squared per Leigh Mercer,
Cited in this twisted limerick verse. 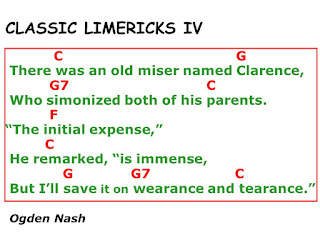 4. A mean miser, name of Clarence -
Simonized both of his parents;
Found initial cost of care
Immense, but still declared,
He’d save on wear- and tearance
Humor which emerges
Clearly from O. Nash’s limerick verse. 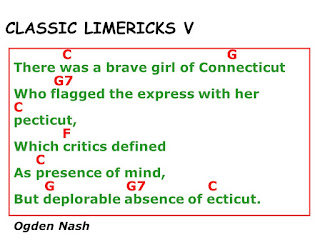 A brave girl of Connecticut
Flagged the train with her petticut.
Some folks deplored her lack of
Ecticut, some more inclined
To laud her presence of mind -
Debate in which immersed
Her critics in this controversial verse. 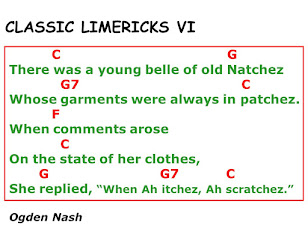 6. A young southern belle of Natchez’
Garments always were in patches.
She divulged she itched, but scratches
If the need arose;
Played havoc with her clothes,
Which stitching could reverse,
Apart from this fickke twist of verse.

CHORUS:
People say it makes them sick
To hear too many limericks;
I fear it had become my shtick,
But now I've lost the knack,
With no good jokes to crack --
A tendency perverse;
Blame it on a fickle twist of verse.
Did you enjoy  Bob singing the classic limericks? Stay tuned for a follow-up post on April 15, 2021:
Pending Topics...
7. "A flea and a fly in a flue" - author unknown, often attributed to O.N.
8. "There was a young lady of station" - Lewis Carroll. 9. "A wonderful bird is the pelican" - Dixon Merritt. 10. "There was a young lady named Bright" - Reginald Buller.11. "There was an old man of Peru" - Edward Lear. 12. "There was a young fellow of Wheeling" - traditional. 13. "Hickory dickory dock" - traditional. Chorus. "People say it makes them sick" - Giorgio Coniglio.
If you want to resume daily titillations on our blog 'Daily Illustrated Nonsense', click HERE.
Posted by Giorgio Coniglio at April 10, 2021