A Didactic Poem about Word-Pairs: The REDUPLICATIONS

WORDPLAY post #26
ORIGINAL POEM:
AUTHOR:  Giorgio Coniglio, July 2015, updated March 2017.
SONG LINK: This poem, consisting of a lesson on types of reduplication, evolved as a musical parody using the template of "The Elements" by Tom Lehr. You can find the song-lyrics, with accompanying ukulele chords on our sister-blog "Giorgio's Ukable Parodies" here.


EXPLANATORY NOTE:
This poem has been expanded and otherwise somewhat modified somewhat since its original posting as song-lyrics on the site AmIRight.com.
This posting of The Lesson, and subsequent posting of a Lexicon of Reduplications will contain a total of almost 300 examples of this fascinating and amusing linguistic form.


1) Introduction
I’m so enthralled with lyrics – their inherent musicality;
I love the words I’ve heard, for both their quantity and quality.
And so I’ll share with you this recent lexic revelation –
My favorite word-device goes by the name ‘reduplication’.

This humble term is used for killer-diller innovations,
Some recent lulus – chick flick, boy-toy – marvellous creations.
For others, spoke with reverence, their birth can date back centuries
Like hully-gully, boogie-woogie, riff-raff, and hurdy-gurdy.

These fuzzy-wuzzy friends are formed by vocal repetition,
With wi-fi you might find them in Wiki’s current edition;
The three important sub-types you will wiki-wiki* learn about
Are known as Rhyming, Exact, and the oddly German-named Ablaut *.

2) Rhyming Reduplicates
Hear hear! some fine examples start with “H”, like helter-skelter, see!
Hodge-podge, humdrum, hubbub, hillbilly, and higgledy-piggledy.
Although the showing’s not so glowing for some, like the letter “D”
Just ding-aling and Double-Bubble, and surname of H.-Dumpty.

3) Exact Reduplicates
As toddlers we knew quite precisely what pee-pee and yum-yum meant
They’re constituted by exact repeating of the elements.
Extension into adult life – tsk-tsk!  it doesn’t matter
For mahi-mahi, rah-rah! hubba-hubba, night-night, yada-yada.

4) Ablaut Reduplicates
Linguistic term that might put off, but don’t throw in the towel
To form the second part you usually change a single vowel.
Criss-cross, splish-splash, King Kong, mish-mash provide the explanation;
Though tidbit, boob-tube, whipper-snapper show some variation.

5)  Borrowings from Other Languages
Some foreign words sound quite absurd, and might be greeted with yuk-yuks,
Like chi-chi, tutu, tête-à-tête, and tse-tse, muu-muu and mukluks.
6) 'Shm-Reduplicates'
And many word-shmords are employed by speaker-shmeakers of Yiddish,
Like fancy-shmancy, choosy-shmoozy, horseradish(mmh!), gefilte-fish.

7) Related Forms e.g. collocation
Dream Teams of paired words get primetime - in rhyming collocation;
These catchy terms, like kitty-cat, aren’t true reduplications.
Tut-tut! for many wild-child words, there's no accord on how they're grouped,
Like fuddle-duddle, Walla Walla, voodoo, wiseguys, hula-hoop.

8) Conclusion
The lesson's sung, my cha-cha's done, we’ve reached our termination.
(Boo-hoo!) True blue, and through and through we’ve viewed reduplication;
But while we bid our fond ta-tas, I leave this final message – “HI!”
These phrases love to start with “H”, and their initial vowel – “I”.

* German= "off-sound", word coined in the 16th century to indicate a systematic change in the vowel of a word-root to convey a difference in meaning; rhymes with shout
* Hawaiian for quickly or  bus !! 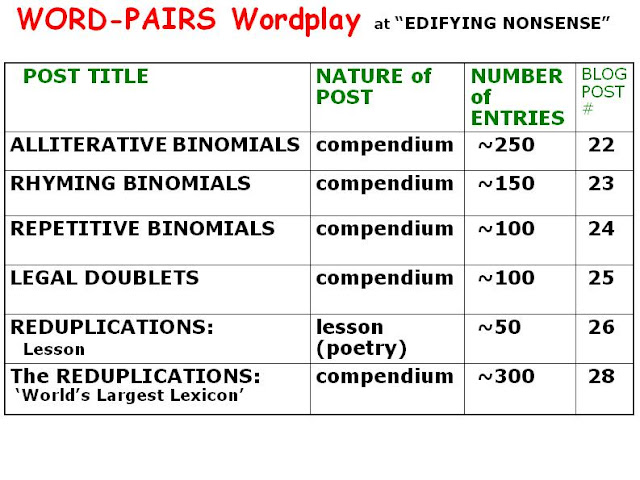 Posted by Giorgio Coniglio at February 05, 2017