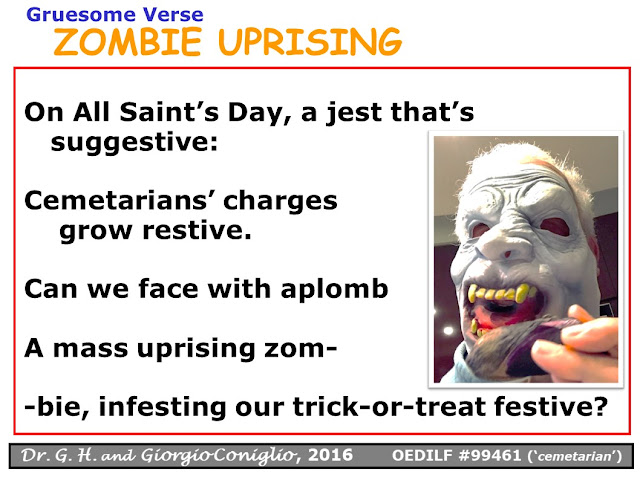 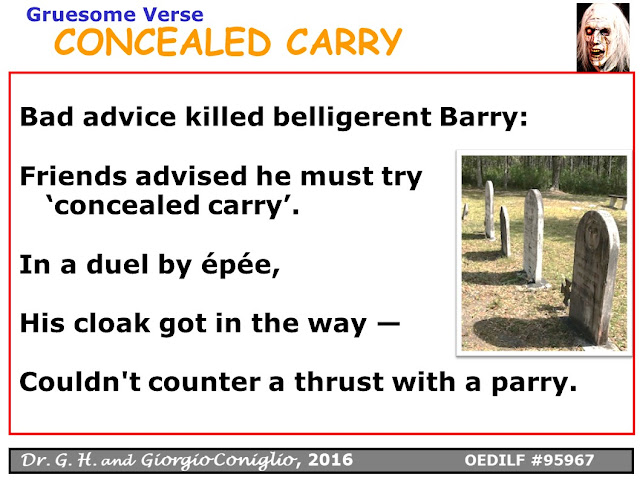 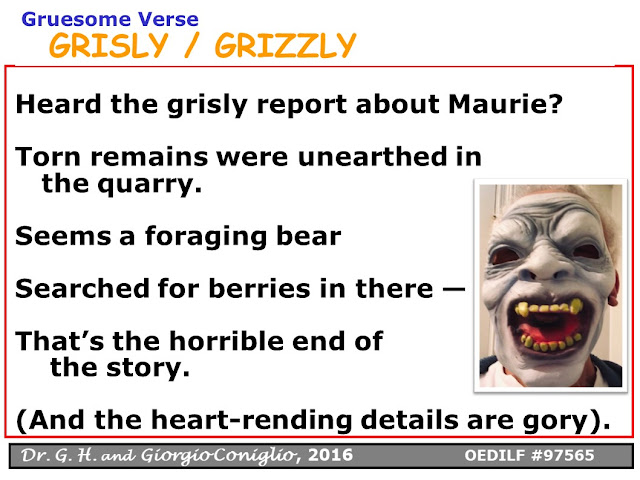 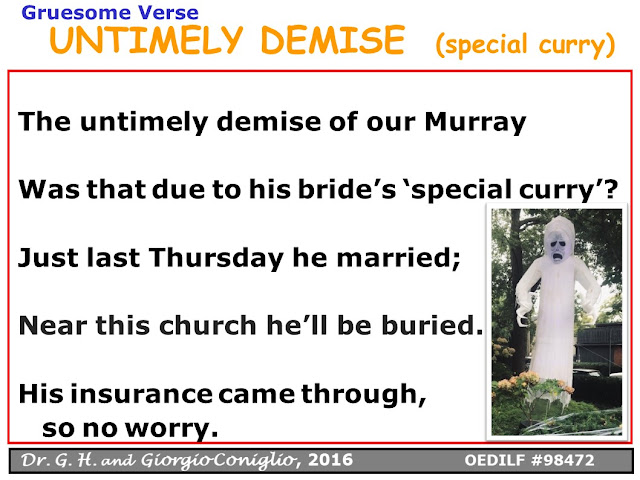 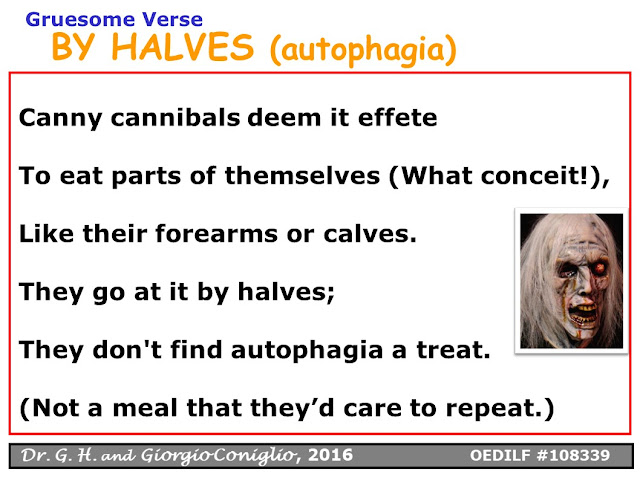 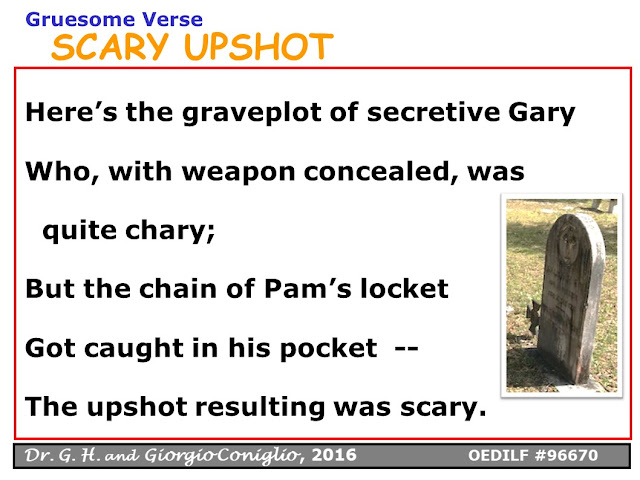 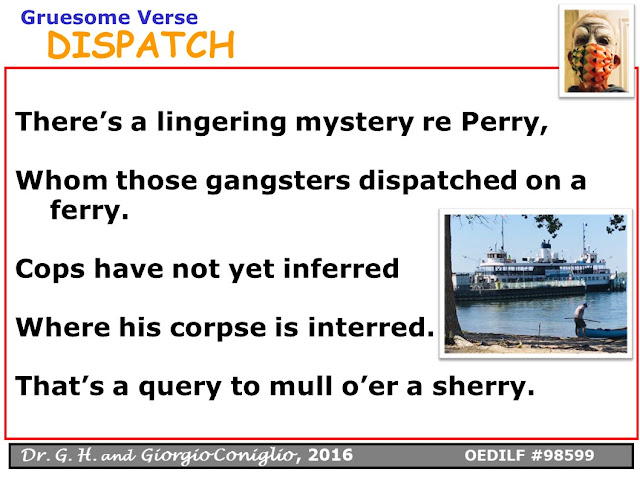 Posted by Giorgio Coniglio at October 15, 2021 No comments:

1   #T527395
He fractured a wrist bone articular,
When he fell from his moped vehicular.
"It's my scaphoid!" moaned Eric,
Wise American cleric,
"Though most Brits call it carpal navicular."
"AVN? It is prone, in particular."

AVN: medical initialism for avascular necrosis, lethal damage to bone tissue resulting from traumatic interruption of its blood supply; the scaphoid bone of the wrist is particularly susceptible.
The human skeleton has two boat-shaped small bones, one each in the ankle (tarsal) and wrist (carpal) areas. The Latin-derived term navicular ('boat-like'), is applied to either bone, and is favored in Britain to pertain to the wrist site, whereas the Greek-derived term scaphoid seems to be applied only to the carpal bone, but is the preferred term in America.
How did Eric know that it was his scaphoid that he had fractured? See the verse anatomical snuffbox.
https://en.wikipedia.org/wiki/Wrist
https://en.wikipedia.org/wiki/Scaphoid_fracture
2  #T527416
Anatomical snuffbox, when painful,
After falls on the hand is explainful.
Classic sign (i.e. token)
That the scaphoid bone's broken.
Urgent treatment is bound to be gainful.
A companion piece to carpal navicular.
Temp AN:
https://en.wikipedia.org/wiki/Scaphoid_fracture
3  #T527157
On emergency X-rays Doc took
(It's surprising how normal they look)
There's no hint of the break
That still makes your wrist ache —
Hairline fracture of hamate bone's hook.
The hamate bone, one of eight small bones of the human wrist, has a prominent hook, or hamulus, that provides some protection to the ulnar nerve as it proceeds down the arm to supply the fourth and fifth fingers. A 'hairline fracture' of this bony process (outcropping), not an uncommon injury in golfers, baseball players and hockey slap-shooters, may result in continuing pain. Frequently, the injury is not detected on initial x-rays, but may show up on computed tomography (CT), a bone scan, or on follow-up wrist X-rays.

Temp AN:
https://en.wikipedia.org/wiki/Hamate_bone
4  #T527203
For your fracture, our treatment's complete —
Good alignment of wrist, leg or feet.
Range-of-motion refinement,
Regain strength? Your assignment:
Walk down Physiotherapy Street.
Modern orthopedic treatment of displaced limb fractures often attains the aims of stability and appropriate alignment through the surgical technique of internal fixation. Injured limbs have then undergone the dual trauma of both the original injury and the surgical correction. But, with all the parts back in place and correctly aligned, the patient can work (with the aid of a physiotherapist) to regain range-of-motion, muscle agility and strength.
5  #T527159
In a fight, you are right, you insist.
Your punch lands. You might injure your fist.
But, this fact I recall:
On your outstretched hand, fall —
You're more likely to fracture your wrist.
Injuries to the metacarpal bones, such as knuckle fractures, are most common in injuries occurring with the closed fist, e.g. a punch thrown in a fistfight. In fact, an isolated fracture of the head of the fifth ('pinky'-side) metacarpal is known as a boxer's fracture.
On the other hand, fractures of the wrist (including the distal ends of the radial and ulnar bones of the forearm and eight intrinsic small carpal bones) are most commonly caused by a fall on the outstretched hand. Of all of these, fractures of the distal radius, sustained when attempting to break a fall, are by far the most common.

Temp AN:
https://en.wikipedia.org/wiki/Boxer%27s_fracture
https://en.wikipedia.org/wiki/Distal_radius_fracture
6  #T527579
Recent fracture, Doc called "comminuted" —
That idea I vainly disputed:
"Tripped and fell, in one place,"
(I admit, with no grace);
But, bone X-rays my concept refuted.
A bone fracture, produced by relatively severe force, e.g. a motor-vehicle accident, and involving several locations in the same bone, is said to be comminuted. The visualization of multiple fragments on radiographs of the relevant bone makes the diagnosis straightforward, and heralds the need for surgical intervention.
7   T#529187
The olecranon fracture's well known:
Slip or trip, land on hand, moan and groan.
But, today, not just runners,
Also e-skateboard funners
Join the queue (plate or screw). Funny bone!
funner: a neologism for 'fun-seeker', as used here; also, a disputed equivalent to the comparative expression 'more fun'

The olecranon is the boney process (extension) of the forearm's ulna that extends into the elbow joint. Fractures of the olecranon are moderately common, due to direct trauma (fall on the elbow), but even more so due to indirect trauma (transmission of intense force with a fall on the outstretched hand). Owing to the proximity of the ulnar nerve, a broken funny bone may be associated with numbness and tingling extending into the fingers.

Such injuries have bedevilled joggers and elite athletes, but recently have become more common with the popularity of personal electric transport devices. Surgical treatment is generally required for these fractures that most often have displaced bone fragments.
8 #T527921
Heterotopic formation,
Extra-skeletal ossification:
Post-trauma, new bone
Seems to grow on its own —
Interferes with your re-ambulation.
Rarely, joints get encased, as in stone.

Usually asymptomatic, new bone formation in extra-skeletal sites seems to occur after physical or surgical trauma, particularly in the lower limbs following joint replacement. Occasionally, within several weeks after the inciting episode, tenderness and swelling near major joints may occur, needing to be differentiated from venous blockage, and requiring bone scanning for detection, as initial radiographs may be negative; this variant syndrome is known as myositis ossificans. Rarely, in progressive cases, surgery is eventually required to allow normal mobility at affected joints.

To the DEXA test now we should turn
(Your bone mineral mass our concern).
Dual rays have a hand in
A bone-density stand-in;
Hip and spine fracture risk we discern.
DEXA, or dual energy X-ray absorptiometry, is a standardized imaging test to assess bone mass in the context of osteoporosis. Differential attenuation for the two photons of different energies is assessed for each element in a planar field, usually for hip and spine sites. The technique actually measures bone mass as mass per unit area (rather than volume) of tissue. Despite this drawback, the DEXA technique is excellent for serial tests in the same patient, and its use has become so widespread that its results are regarded as synonymous with bone mineral density.
10  #T528114
Banker Elvis, consulted by phone:
"Let's invest in your smashed pelvic bone!
Get it rodded and plated,
And post-op," he then stated,
"We'll advance you a rather large loan."
"Its collateral? That house that you own."

Costs incurred by surgical care in the United States can be devastating. Multiple pelvic fractures may accompany major trauma to the trunk. It is, however, unusual for bankers to be consulted directly re the affordability of urgent surgical procedures.
11    #T527952
"Mid-foot pain," I complain, "I'm no crank.
My foot suffered a serious yank.
ORIF stat I've requested
As my plain films suggested
The fracture type known as Lisfranc."
"ER staff and consultants, I thank."

plain films: medical jargon for two-dimensional x-ray studies as opposed to CT, although digital media, not 'film' emulsion, are now generally used to analyze and record the images

With these injuries, involving one or more fractures, metatarsal bones of the lower foot are dissociated from the tarsus, making the mid-foot unstable. They were first observed in cavalry men during the Napoleonic Wars and later described by a French surgeon, Jacques Lisfranc de St-Martin. In English medical jargon they are known as Lisfranc (LIZ-frank or liz-FRANK) fractures. Self-diagnosis of this type of injury by a patient would be an unusual event.
In "Patients and their Maladies" 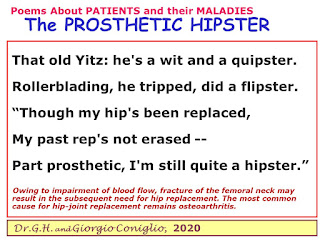 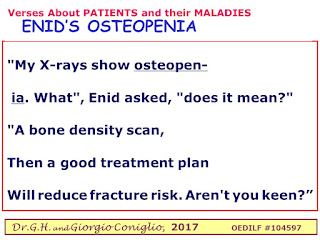 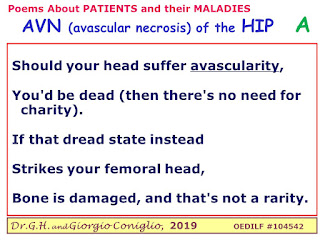 in "Doctors and their Practices"
#T525639
For many sites in the upper and lower limbs where trauma has resulted in fracture with angulation or rotation of the fragments, surgical treatment ('ORIF', or Open Reduction, Internal Fixation) has become the standard.
Temp AN:
https://en.wikipedia.org/wiki/Internal_fixation 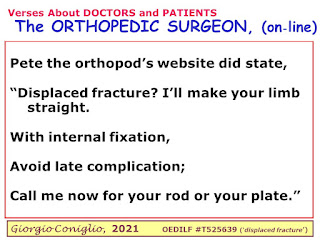 Posted by Giorgio Coniglio at October 10, 2021 No comments: 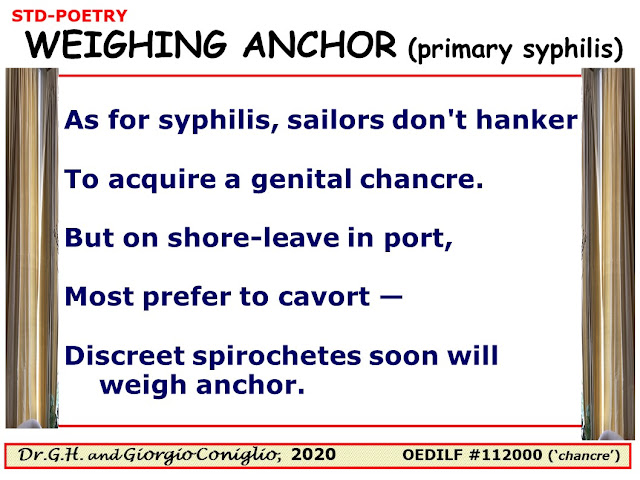 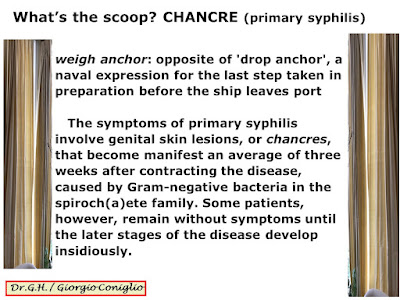 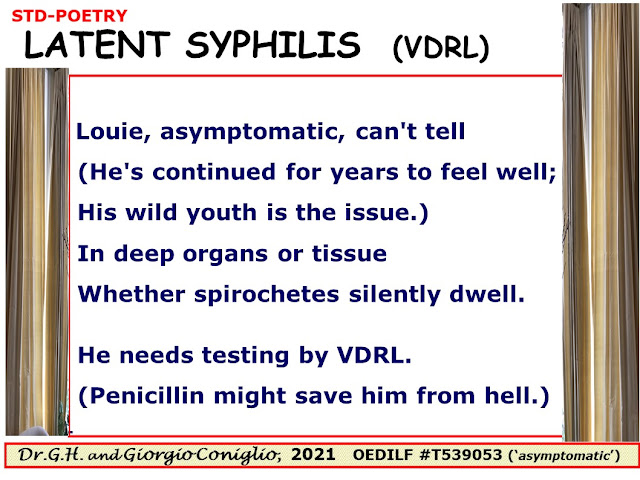 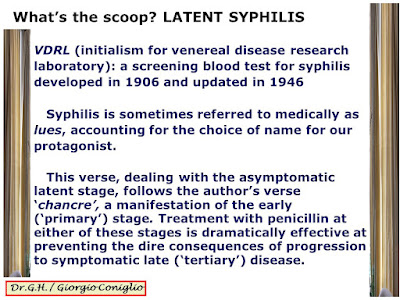 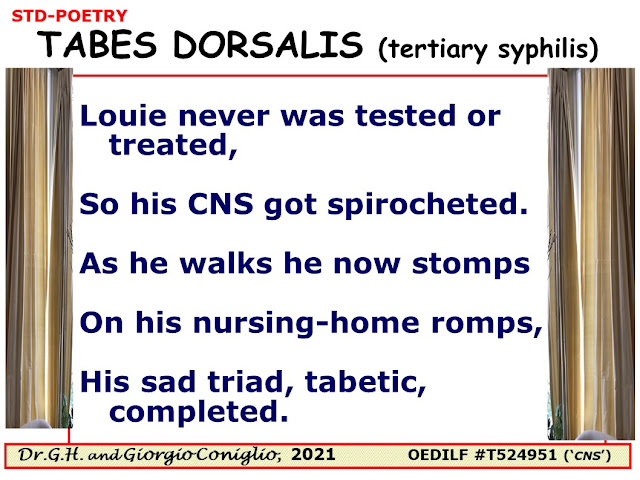 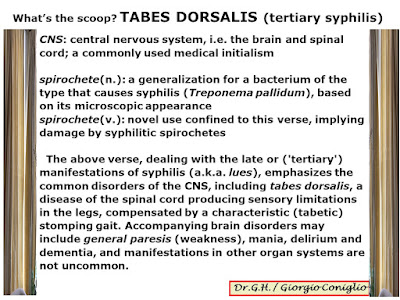 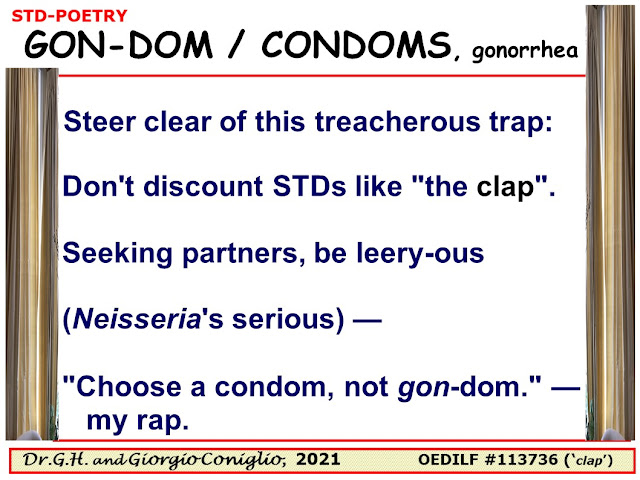 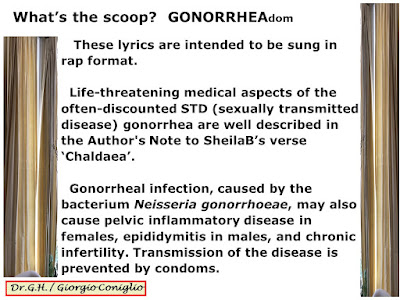 Posted by Giorgio Coniglio at October 05, 2021 No comments: