Lyrics for Singable Satire: "THE BALLAD OF GIULIANI", Part 1

ORIGINAL SONG: The Ballad of Davy Crockett , by Bruns and Blackburn, Walt Disney Studios 1954, anthem of the "Crockett craze". Several versions of the song were prominent on the Top Ten in 1955.

Youtube versions of the song by several performers are available via links to...

BACKGROUND INFO: Max Boot's opinion-editorial appeared in our local newspaper on May 8, 2018, under the heading "The long, disappointing fall of Rudy Giuliani". Here is the link to the particular newspaper column.
Other takes on Giuliani's statements about the Presidents' legal and personal imbroglios are given by Jennifer Rubin here, and Amy Sorkin here. However, this first part of the song deals with the more positive earlier portion of this flamboyant leaders' life-story.

SONGLINK: (for those who are signed up to visit our private song-lyrics blog)" See the version of this post designed for ukulele and guitar players on 'SILLY SONGS and SATIRE' here.


The BALLAD of GIULIANI, part#1

(to the tune of "The Ballad of Davy Crockett")

Born in East Flatbush, down in NYC,
'Greenhorn' family from Tuscany.Dad done time in Sing Sing for robbery,An' Rudy volunteered for Robert Kennedy.Rudy Giuliani,Voice of those wild Trump Years!At Manhattan College, took philosophy.Enter the priesthood? "No, that's not for me!"Studied Law at New York University,To graduate cum laude with J.D. degree.Rudy Giuliani,Startin' up his career. To prosecute felons gave him a thrill.Though tactics like the 'perp walk' were 'overkill'As U.S. Attorney he showed great skill.His record of convictions is unequalled still.Rudy Giuliani,Outshone his legal peers.He fought single-handed through the Mafia Wars.Racketeering mobsters he did abhor. Put their capos behind bars, and settled the score, And RICOed* inside traders, and convicted more.Fearless Rudy launchin'His politickin' career.Two terms as Mayor start in '93.First Repub. in office there since John Lindsay.Libs felt queezy with the GOP, but heCleaned the streets, cut crime, and folks said "That's for me!"Rudy Giuliani,The Big Apple's brigadier. He craved a Senate seat; to lose was gall.'Specially to Hillary, he'd hate to fall.But marital scandal, and a doctor's call,And bad race relations triggered his withdrawal.Rudy Giuliani,Back in the Mayor's chair. Rudy was the guy in charge when Towers fell.At Ground Zero visited and stayed a spell.Folks felt he handled the disaster well,And was honored by the Queen as I've heard tell.Rudy Giuliani!Time's Person-of-the-Year.Rudy Giuliani!Time's Person-of-the-Year.

SUPPLEMENT: The FUN WITH IMPEACHMENT Collection

WORDPLAY POST #186
A REPRISE of wordplay and head-shaking by Giorgio Coniglio from May, 2018 and subsequently. Plus a couple supplements with important facts and concepts that you might previously have missed.

This review of past postings was incited by today's news (September 24, 2019), relating that we are squarely in the midst of another unfolding impeachment drama.

But we all need to have a bit of fun, so here's the material to review. Click on the links, and cluck to your heart's content...

Q: In what American towns, anagramatically, can we find H.C.'s 'deplorables'?
A: There are a number of states in which they are found in smaller towns and cities. Some of these are shown in the following map: 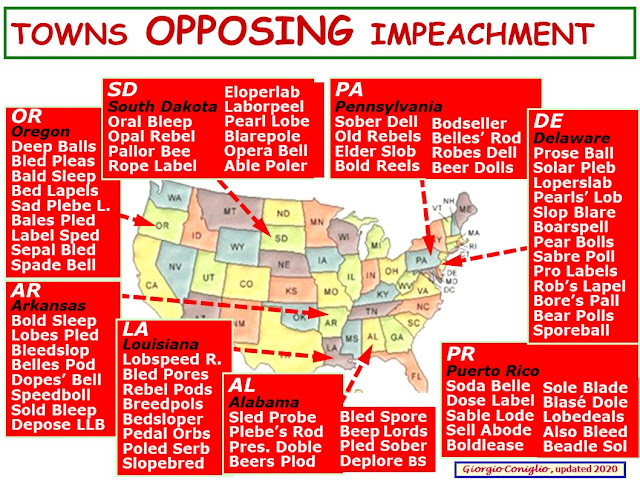 If you have enjoyed these verses on the theme of American political satire, you might like to proceed to view other items in our collection including:
-  'Poetry and Pathos: Gun Control Verses'
- 'The Fun with Impeachment Collection'
- 'a brief saga: Mar-a-Lago'
- 'political palindromes A through P' (click HERE to start).
There are also some parody-song lyrics posted in 2019 and 2020, that you might like, including:
- 'Brennan's Tweet'
- 'Rosenstein'
- 'Kooky Presidential Views'
- 'Jailhouse Now'
- 'Vlad Putin's Blogger'
- 'Indiana Song'
- 'Get Me Roger Stone', and
- 'The Ballad of Giuliani', part I and part II.

A Hematology Ballad: TO CLOT, OR NOT TO CLOT

SATIRE COMPOSED: Giorgio Coniglio (registered pseudonym) and Dr. GH, July 2019. Thoughts about blood-clotting disorders and their treatment have been incited by current health issues affecting family and friends.
Many of today's verses are also under review at OEDILF.com, an online humor dictionary that has accumulated over 100,000 carefully edited limericks.  Links to other medically-related posts here at "Edifying Nonsense" are given at the bottom of this post. 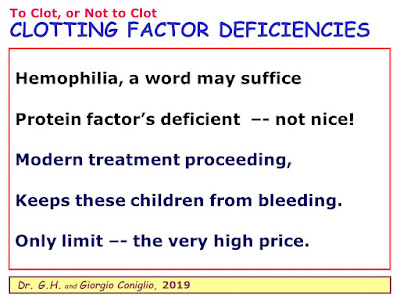 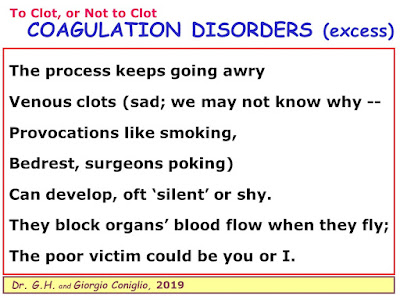 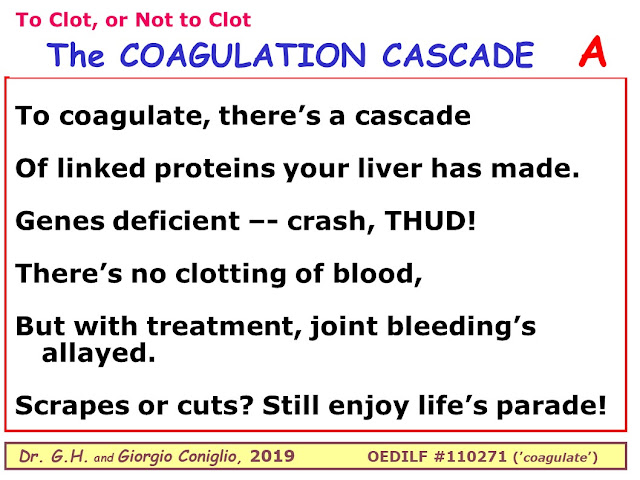 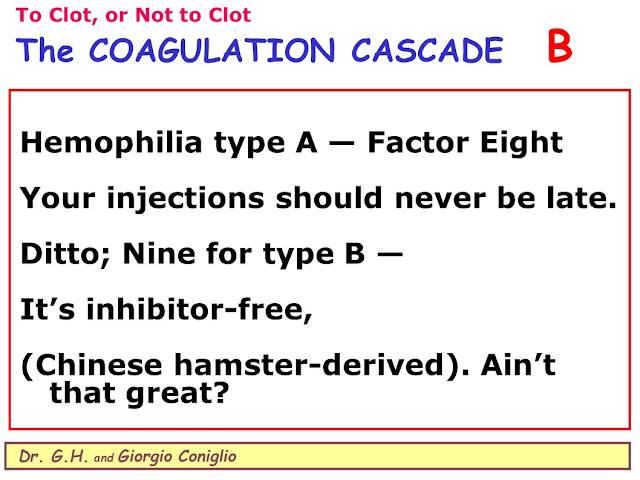 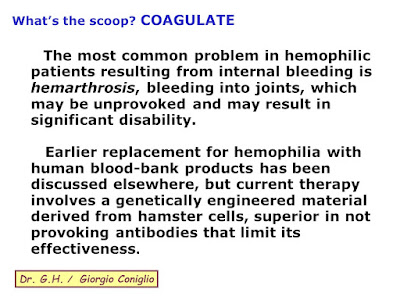 Learn more about hemophilia and its current treatment with hamster-derived biosynthetic proteins at Wikipedia. 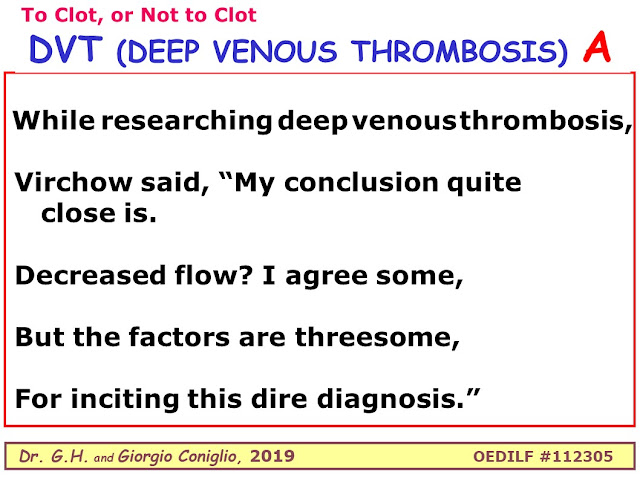 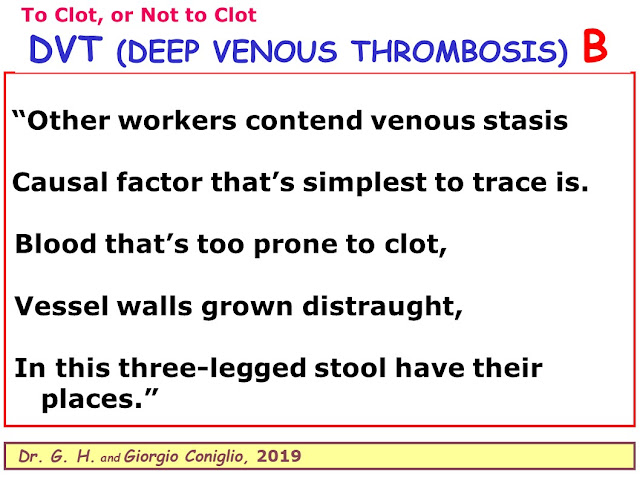 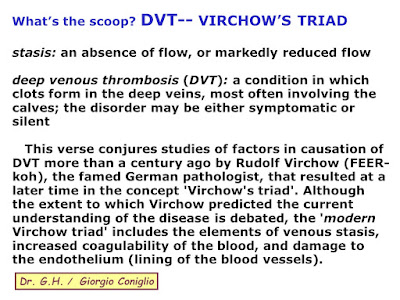 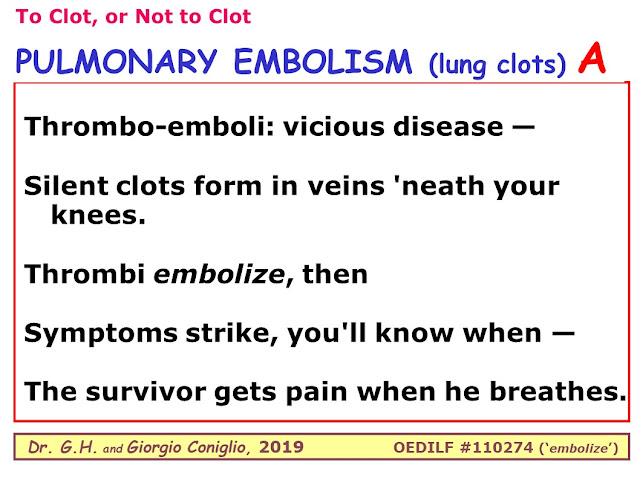 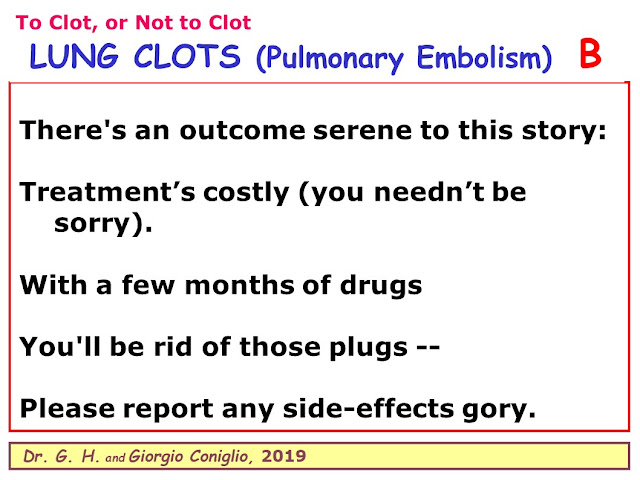 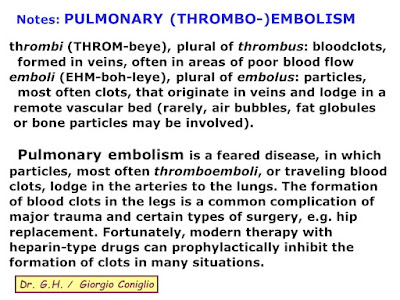 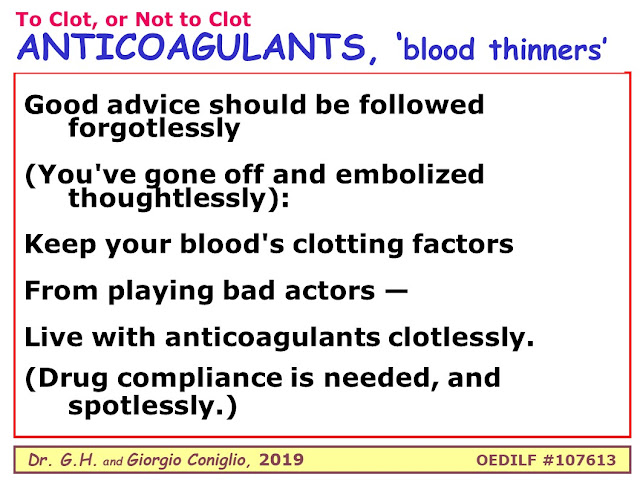 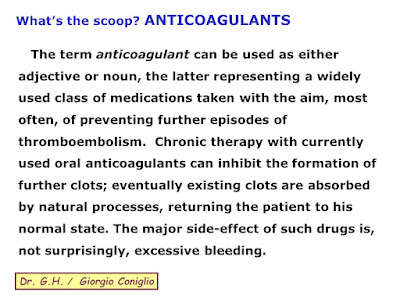 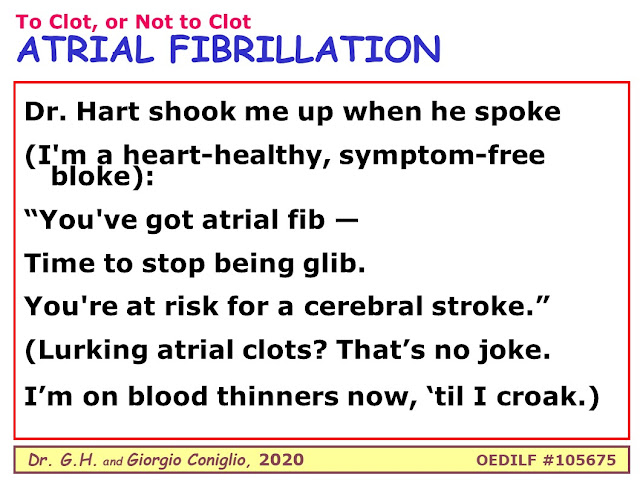 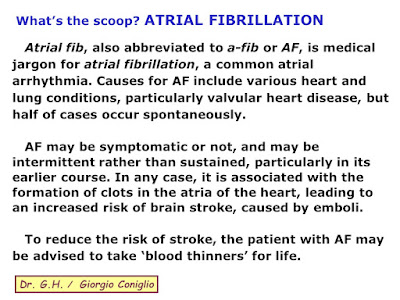 Learn more about atrial fibrillation and its treatment at Wikipedia.
AND, HERE'S A LIST OF LINKS to collections of intriguing verses on other medical/dental topics that can now be found on various posts including:
Patients and their Maladies (parts #1, #2 and #3)
The Bottom Line of Medical Humour
Funny Bones (parts #1 and #2),
Doctors and their Practices (part #1 and #2)
To Clot or Not to Clot
The Scopes of Modern Medicine
Handbook of Medical Testing Statistics
Pandemic Verses
Poetry of Healthcare
STD Poetry
Diagnostic Imaging (selected topics)
Dental Feelings
and in 'brief sagas' including:
Drug Development
Radiation Exposure
Methylated Spirits
The Gastro-Esophageal Junction
Workplace Pollution
Food Intolerance
Fluoridation
DIRECTION FOR WEB-TRAVELLERS:
If you want to resume daily titillations on our blog 'Daily Illustrated Nonsense', click HERE. Once you arrive, you can select your time frame of interest from the calendar-based listings in the righthand margin, and check the daily offerings for any month in the years 2020 through 2022. (There are now over 900 daily entries on the Daily blog, and most of these are also presented here on 'Edifying Nonsense' in topic-based collections.)
Posted by Giorgio Coniglio at September 15, 2019 No comments:

WORDPLAY post #183
This post is a continuation of #179, Tourists' Palindromic Guide: The Americas #1.
SATIRE COMPOSED: Giorgio Coniglio (registered pseudonym) and Dr.G.H., 2018.
WORDPLAY LINK: The panels showing palindromic phrases derived from geography of the Americas were originally displayed on Wordplay posts on this blog during the interval from May through September 2018. Geographically focused concoctions are among the many palindromic treasures honored and displayed on this site. Check out the list of entries for "The Palindrome Suite" in the slide at the bottom of post #179.

SONGLINK: For those readers who like poetry set to music: You can find lots of singable limerick-medleys, as well as other types of song on our sister blog "SILLY SONGS and SATIRE", such as this recent post. In addition, some readers will be delighted (others will continue to groan) at our collection of songs based on palindromic phrases -- see the bottom of post #179, for these links as well. 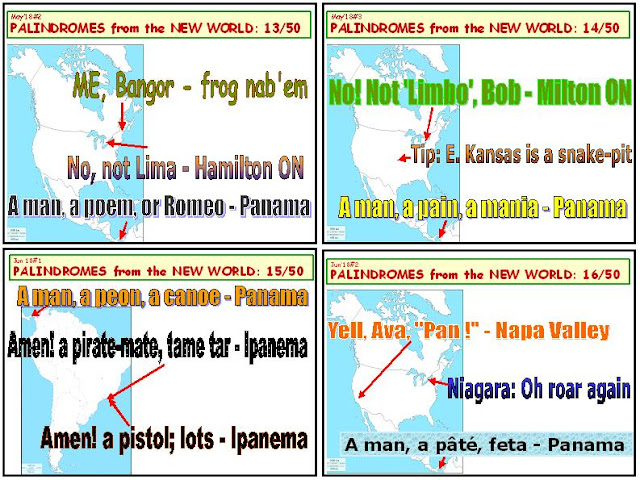 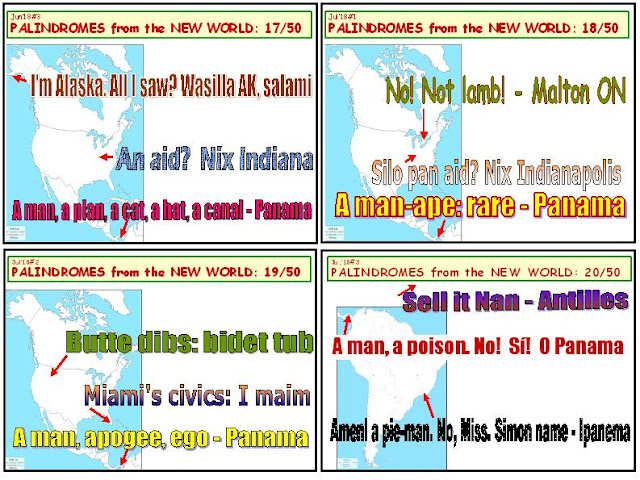 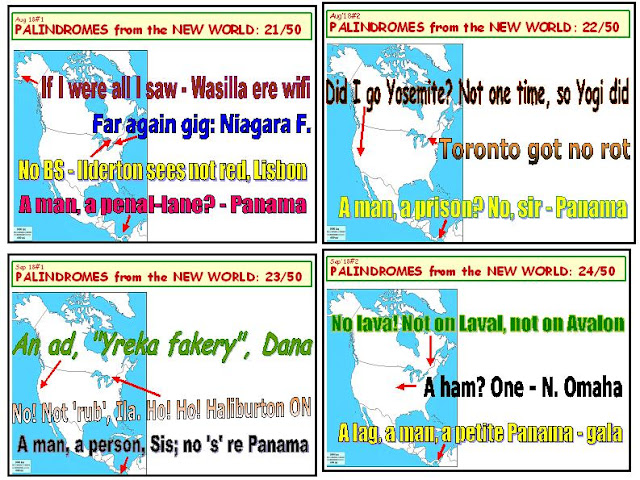 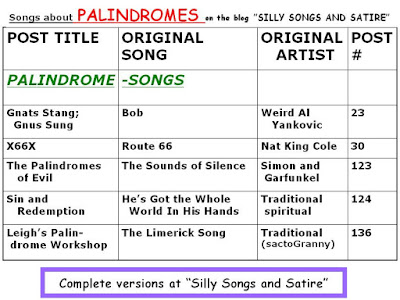 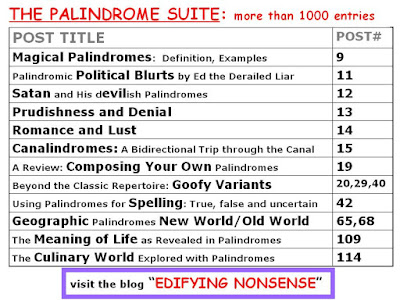 For hotlinks, check out the blogpost "Hotlinks: More than One Thousand Palindromes", or see below...


Posted by Giorgio Coniglio at September 10, 2019 No comments: